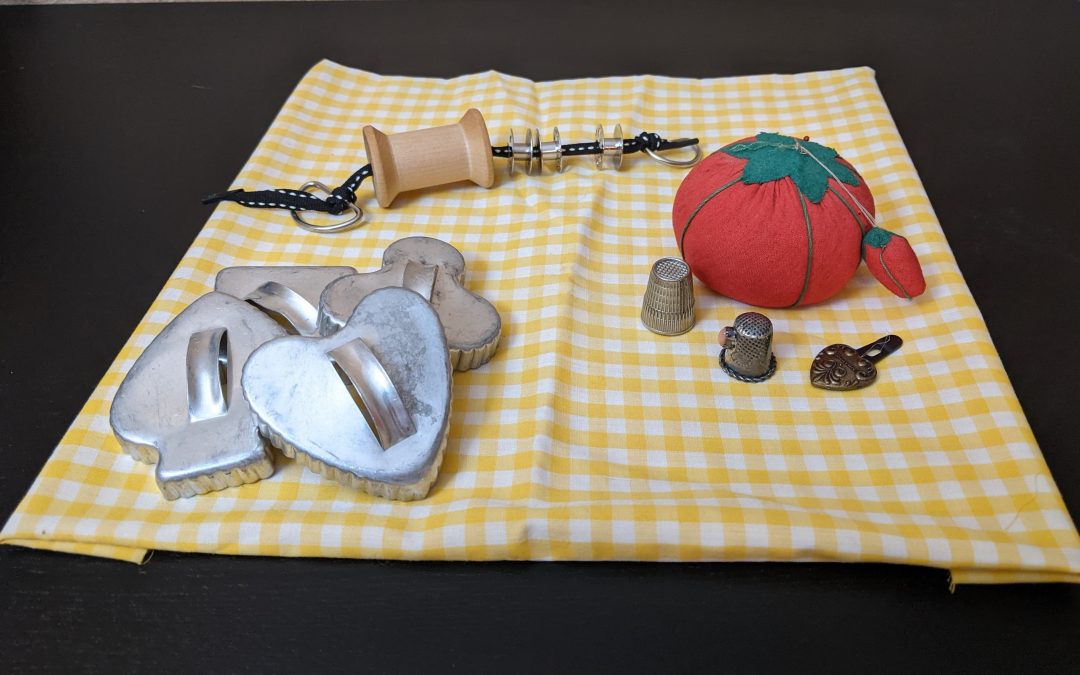 We called my great-grandmother Nanny. Her toy chest was a worn wicker laundry basket filled with wooden spools (all that remained after their sewing thread had stitched and mended clothing or other torn fabric during the Great Depression or World War II), an iron from a time when an iron was made of iron, old shoelaces, buttons from clothing long gone, a wooden darning egg, and much more—enough that we were always able to imagine new ways to imagine their purpose. They came with no instructions; the only assembly needed was guided by our ideas for using a combination: shoelaces and spools to make a train, wood clothespins and a small bit of fabric to make a doll. The iron was sometimes part of our make-believe-family scenarios but also doubled as another form of transportation: a ship that glided over a rug that served as an ocean.

Carrying on Nanny’s tradition but adding purchased toys, my parents and relatives gave us wooden blocks and a small wooden workbench with a wooden hammer we used to pound pegs from one side to the other and back again. Over time, other sturdy wooden toys became part of the mix. Board games such as Chutes and Ladders were stacked on a closet shelf to save them from the possible crush of toys when we tossed them back into a laundry basket. Eventually, the laundry basket was replaced with another container large enough to hold toys we no longer played with. Our aunts, uncles, and younger cousins would still visit, and that treasury of toys was anticipated like Santa’s stuffed sack on Christmas Eve.

As we three siblings had children, the toys sparked the imagination of another generation of our family. We watched as they erected houses, castles, and fort-like barriers with the same wooden blocks we had used. The Lincoln Logs had lost some parts but could still serve to build structures or to serve as cars and trucks on a carpeted highway. The new constructions flowed freshly from the minds of our children, free of building instructions from their parents and grandparents while we adults talked among ourselves. Eventually, the Cootie Game, Legos, and toys by Mattel and Tonka were added to our mound of blocks, miniature wooden hammers, and dolls that were a little worse for wear.

When my son and daughter were young, they had beautiful wooden toys—loving gifts from friends and family. A wooden train had my son’s name spelled out, one letter per train car, plus the wooden engine car, all coupled with brass hooks and eyes. Perhaps it was due to the abundance of toys available in our home that these wooden toys had their place as part of my children’s bedroom décor more often than as playthings. Yet when we visited their grandmother and grandfather, the wooden blocks and other remnants of my childhood were part of the joy my children associated with their visits.

By then, some children in our parents’ neighborhood came to think of them as a sweet, child-loving grandaunt and granduncle. When these young ones stopped by, the large container of toys would come out and the power of imagination would quickly lead to joyous play—often collaborative, with one child adding to the ideas of the other. There came a time when the two young boys next door would knock and ask if they could come in to play with the toys. They knew it was okay to ask without being invited and accepted the response when their aging neighbors said they were unable to invite them in to play.

And then another generation of our family began. We watched our grandchildren enjoy some of the same toys that our children had loved and some that we had loved before that.  That bin of toys had become part of our identity as a family.

Science kits that come with explicit instructions now catch the eye of parents and their children on shelves of toys in our local children’s bookstore. Hand puppets and wooden puzzles share the space, though there are far fewer of these generations-tested options than of those that are manipulatives for specific learning objectives. This is a matter of supply and demand in a city with many parents who want their children to have experiences outside of the classroom while learning how to follow instructions and gain knowledge. Following instructions for building locking-brick trains, ships, castles, or an entire neighborhood isn’t, of course, a single project to be shelved, but rather a precursor to a child’s creative stories, played out with these toys they’ve built themselves.

We find ways to encourage imagination coupled with creativity with each new generation, and that is a gift that comes without instructions, one that will make children’s lives richer, no matter what their future holds.