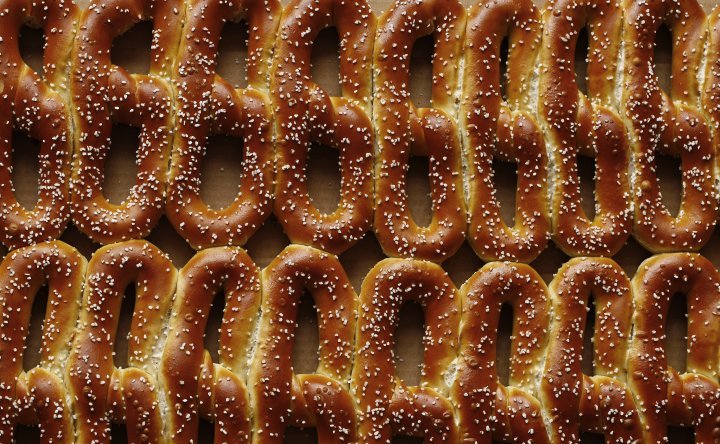 I understand that there are people who cannot imagine putting any kind of mustard on pretzels. I get that. I can’t imagine putting yellow mustard on anything. Pretzels, of course, should be paired with German-style brown mustard. This is no advertisement, but I grew up with Gulden’s brown mustard in the refrigerator and pretzels always available in the cabinet. The combination is a special kind of comfort food for me. One with a very long personal history that extends back before I was born.

I was born in Philadelphia. And there is no soft pretzel like a Philadelphia soft pretzel, made the traditional way. Back in the day, enterprising young boys would station themselves to lure pedestrians at frequently traveled sidewalk corners, just as they might sell roasted chestnuts during the winter. As automobiles replaced walking, young men turned to standing on the medians of the city’s intersections, reaching out to sell freshly baked soft pretzels with a bit of coarse salt, six of these elongated beauties in the kind of brown paper bag that we used for taking lunch to school. I strongly believe that these young men offered a significant culture-affirming service.

When I return to the East and land at (or depart from) PHL, I hunt down airport vendors who sell these fundamental parts of the cultural cuisine. I regret the lack of the brown mustard at the kiosks but make do with a plain pretzel, lightly salted. Truth be told, I always buy three. And they are gone before I reach my destination.

My father once shared the story of his early entrepreneurial efforts as a child during the Great Depression. He would buy Philadelphia soft pretzels for a penny each, put paper bags of them in his Red Flyer wagon, and pull them along the neighborhood streets—each pretzel selling for two cents. He would call out to those he knew had a soft spot when it came to these pretzels, being aware that a penny meant something in the 1930s, even after the worst of the depression had passed.

When we moved out of the city and into the suburbs, we still had milk delivery and egg delivery. Added to that was pretzel delivery. Charles Chips Company delivered cans of hard pretzels to our front door. They did not have the complex flavors of the soft pretzels that were part of our history but were pretzels that didn’t need to be eaten all in one day. We were quick to retrieve the milk and eggs for health-safety reasons and quick to retrieve the pretzels because, well, they were almost like family. Long after my sisters and I had left home, we would gather at my parents’ house around the kitchen table, reaching into a bowl of pretzels and catching up with each other’s lives.

I was reminded of all this recently when I bought a jar of German brown mustard and noticed that the label had a sketch of a pretzel. I immediately knew that this mustard concern understands the love of pretzels with brown mustard. I felt validated.

There are many stories—some might qualify as medieval mythology—of the origin of pretzels, but the region that is now Germany is usually credited, as is the pre-Reformation Christian Church. Did these early soft pretzels represent a child praying or a symbol of the bonds of marriage (thus, “tying the knot”)? The answer to this question involves more speculation than verifiable fact. However, historical legends with some verifiability have it that they were ubiquitous during Lent, when Christians practiced a vegan diet—then considered a personal, spiritual sacrifice—while sharing in the delight of these twisted treats.

The great influx of Germanic peoples into the U.S. Middle Atlantic states in the 1700s included many who settled in Pennsylvania, and many of those set up homesteads in farming areas outside of Philadelphia as well as in row homes in the heart of the City of Brotherly Love. Some of my ancestors were among them. By the beginning of the twentieth century, the German pretzels made in the Philadelphia area had evolved in shape to be long and slender, but still with the plump goodness of their ancestral family. For sure, this new shape was ideal for packing into paper bags of pretzels to be sold that day.

Contemporary accounts suggest that eighty percent of all pretzels are still made in Pennsylvania, though it’s the hard pretzel that travels from there across the country. Soft pretzels, in contrast, have a shelf life measured in hours—hence the imperative that you eat whatever you buy close to the time that you first hold these history-rich gems in your hands. The frozen ones you find at the supermarket? You’ll need to use a lot of imagination.

When my parents passed away and their possessions were being distributed within our family, one of the treasured family artifacts was the Charles Chips can. Toward the end of their lives, the one remaining large tin would be filled with Snyder’s of Hanover (Pennsylvania) pretzels, those being far easier to find. But this can, part of the Philadelphia pretzel story, also tells a story about one of our family’s traditions, one that we all remember with warmth and love.