In The Best Cook in the World: Tales from My Momma’s Table, Rick Bragg reflects on a home-cooked favorite:

“It’s just a hamburger, but we would almost dance around the house as children when she told us we were having them.

“I would not know for years that she made them that way to stretch the ground beef, to feed everyone in the house, that she sometimes even worked bread into the meat to make it go further.” (Page 454)

Interesting reflection. Until I read this passage, I thought my mother added a scoop of breadcrumbs and a bit of milk to the ground beef primarily to make burgers more tender. This wasn’t “sometimes”; it was always.

My mother was a fantastic baker, creating pies with the flakiest of crusts: fruit pies and custard pies that were famous with family and friends. She whipped up from-scratch cakes. Her deep chocolate cake with chocolate velvet icing would have won a baking competition.

Still, when it came to cooking, Mom was a product of her era: She had a limited appreciation of herbs and spices, relying almost entirely on dried oregano, dried basil, and dried bay leaves when we were kids. Each of the seasonings had a narrow range of applications. Ground beef in the form of a hamburger patty was seasoned with salt and ground black pepper. Come to think of it, her meatloaf and meatballs were similarly seasoned with nothing more. Tomato sauce for pasta, though, received the full treatment: oregano, basil, and bay leaf. But there was poultry seasoning, of course, to be used with bread stuffing for the Thanksgiving turkey.

My parents were children during the Great Depression. The field of home economics only came into its own during World War I. When the Great Depression struck, families needed to learn how to stretch their budgets, and the U.S. government provided recommendations. This effort gave birth to white sauce, which is exactly as bland as it sounds: margarine, white flour, milk, and salt. As a young wife with a very limited food budget, my mother learned to make and use this gravy when preparing creamed dried beef over toasted white bread. Even at that time, this dish had a nickname that captured what people thought of it. The name involved potty humor.

So, back to burgers. Rick Bragg’s “What You Will Need” list for his momma’s hamburgers includes seventeen ingredients, with a homemade sauce based on ketchup, yellow mustard, cayenne pepper, chili powder, garlic salt, and Worcestershire sauce. My mother’s list of ingredients demonstrated her own culinary creativity, including the substitution of jarred condiments for a handcrafted sauce.

I can’t fault my mother for the way she cooked. She did what she thought was best within a budget, stayed at home with three daughters, and managed our household. She worked with post-WWII cookbooks that advised boiling broccoli for over thirty minutes. She worried about meat that might be undercooked. So to be on the safe side, she baked chicken breasts for over an hour so that they were the consistency of shoe leather but definitely cooked through. However, many of the dishes she made were eagerly consumed by all of us, including American chop suey, which is as American as apple pie and has nothing in common with pseudo-Chinese American cuisine (which gave us canned La Choy chop suey). I loved Mom’s American chop suey: ground beef, canned kidney beans, and canned stewed tomatoes over elbow macaroni.

I was not always charitable in my observations of Mom’s cooking, but I was a younger person then, still given to that adolescent impulse to criticize the people who kept food on the table, provided a roof over our heads, and loved us without reservation. Now, when I think about those vegetables and meats, cooked until they were definitely dead, I’m reminded of the many ways that my mother gave us her very best and cared deeply about our well-being, even in the way she prepared a hamburger dinner or chicken and broccoli.

Patricia is the author of a wide range of essays that span narrative, persuasive, and informational approaches. She believes that most writing benefits from an interdisciplinary approach, drawing on knowledge acquired over decades of diverse learning endeavors. 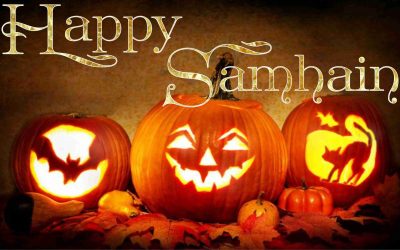 It is time for the fire festival. The druid priests will extinguish the village fire in the communal fire pit as a symbol of the year’s end and rekindle it to signify new beginnings.

END_OF_DOCUMENT_TOKEN_TO_BE_REPLACED 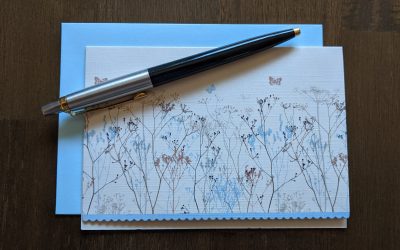 All it takes is a few thoughtful words, captured on paper, and a postage stamp to uniquely express ourselves in a way that shows someone we care.

END_OF_DOCUMENT_TOKEN_TO_BE_REPLACED 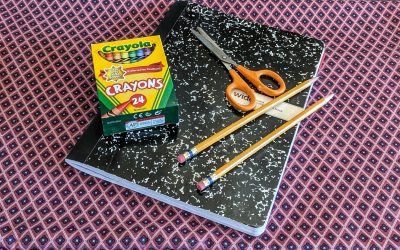 The First Day of School

These are among my indelible memories: taking out my oilcloth and smoothing it over the wooden top of my desk, sharpening yellow pencils before practicing math facts and enjoying the cedar-wood smell of the shavings, reading aloud in the classroom and at home, and practicing penmanship in a copybook.