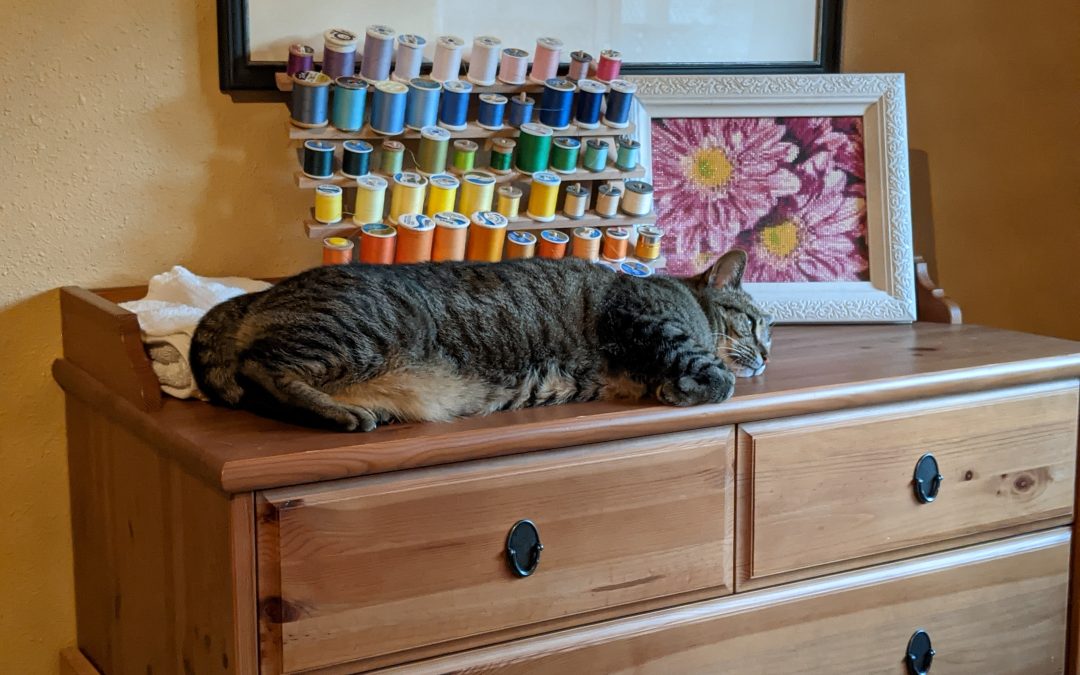 It was a hot day for mid-October, so the curtains for the south-facing patio door were closed. It was not, however, too hot a day for Lyla, and she loves the warmth of the sun from anywhere within our house. Her win-win solution to this dilemma was to spread herself out between the door and the curtain, leaving only her twitching tail as a give-away for where she was. I had shade; she had sunlight. Her buddy, our other cat Ellie, noticed the arrangement and found an opening between the curtain panels where she could sit, facing the sunny gardens– a little disembodied fur visible in the room. I don’t know. I thought it was really funny. Maybe you had to be there.

I have to remind myself that Lyla is not inherently a comical cat. She is a cat with instincts—diverse instinctual behaviors that entertain me every day. I admit to anthropomorphizing her behaviors because I cannot imagine what (if anything) she is thinking when she chirps at moving spots of light. But I do know that all of her antics are deeply instinctual. And I find them all laughable, even the ones that end with a stern admonishment from me.

No one would argue with the statement that Felis catus is a species that is not domesticated in the way that dogs are, though they are described as being a domesticated species. The most that can be said is that they have been selectively bred to be tolerant of living with human beings. However, release a housecat into a wild area, and it will fairly quickly revert to feral behavior. Its offspring will have feral instincts and behaviors. Housecats that are not kept indoors may breed with these feral cats. The kittens are referred to as “hybrids.” Some contend that most housecats are hybrids or are the direct offspring of hybrids. That may explain why we use the term “domesticated” in a very restricted sense.

There is no training a typical housecat to sit, stay, or roll over. However, Lyla has learned that there are some behaviors that are unacceptable… when I come into a room. Otherwise, they are quite acceptable. I concern myself with the hygiene considerations; she does not. I clean surfaces often. She loves to bask in the morning sunlight on the dining room table. It became clear some time ago that I had lost that battle. So now I cover the table and clean the table when Lyla takes off for another of her favorite spots at about 11 AM.

There is a spool of thread missing from my spool rack this morning. I thought Lyla was guarding the spools of thread last evening, but I guess I was wrong. I even have a photo of her in front of the rack. In fact, I must have a thousand photos of her doing what I find hilarious and she does instinctively.

I will share one of Lyla’s secrets: She has been known to fall off of a piece of furniture while attempting to navigate to another spot. I know I shouldn’t laugh. Poor thing! Where are her feline agility skills when she needs them? But she looks preposterous as she attempts to land on her paws. And anything preposterous is an opportunity to laugh.