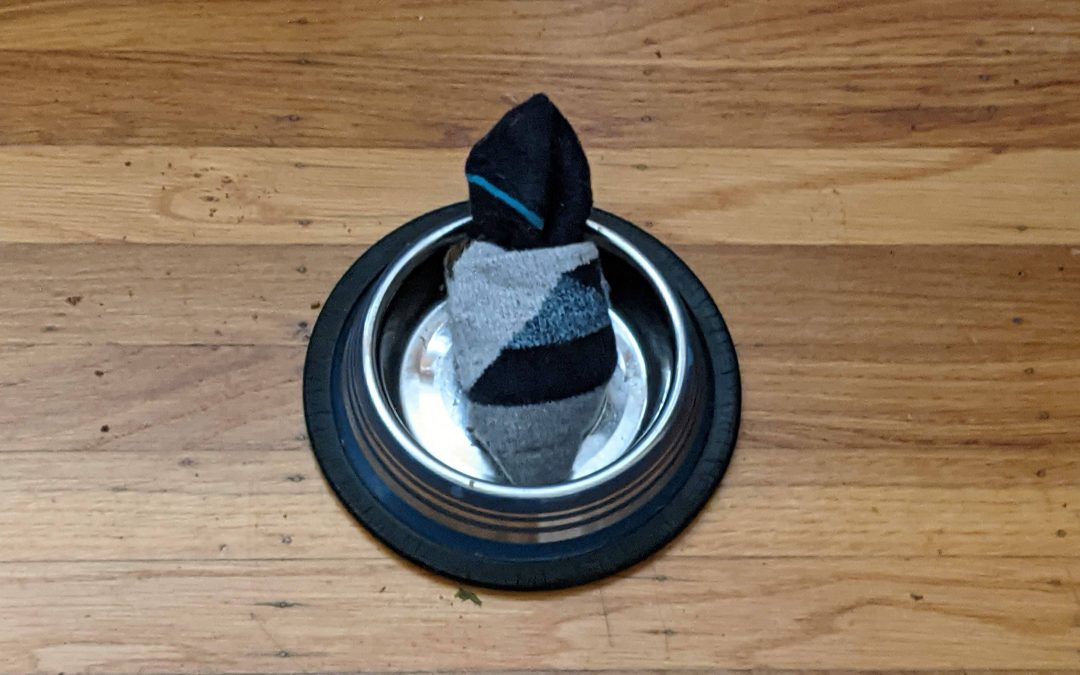 One of our cats is just plain crazy (and I mean that in a non-pejorative way). The other has what I can only guess is obsessive-compulsive disorder.

So then, what to say about feline OCD? Myrna (I’m using a false name to respect her privacy, although OCD is nothing to feel ashamed about) is anxious most of the time. The rest of the time, she’s asleep. She walks apprehensively, making sure no one comes too close to her, other than her best friend, our other cat. She lies in the same locations at the same time of day every day. This is not a symptom of OCD any more than eating breakfast in the morning, lunch in the early afternoon, and dinner in the evening is. Cats like routines. They don’t particularly like things in their environment to change. They become anxious. They resolve this anxiety by smelling the area that’s changed and walking around to see what else might need to be investigated. And then—by and large—they accept what’s new, their anxiety dealt with successfully.

Myrna has an unusual eating pattern, though that pattern isn’t the compulsive behavior she manifests. She will eat only at certain times (unfortunately, she prefers the middle of the night), and she will eat only a limited amount at a time. She eats very slowly. I will contrast this with our crazy cat who will inhale any food she finds, regardless of amount, including what might be in Myrna’s not-quite-empty food dish. She exercises like a cat possessed, and this seems to keep her weight under control. Myrna prefers lying up against a pillow.

It’s Myrna’s relationship with food that, I imagine, has led to a ritualistic behavior that I will anthropomorphize as an attempt to allay her anxiety: She will find a tissue or a small article of dirty laundry and place it close to her food dish. When possible, she makes sure that the item, such as a pair of socks, is totally inside the dish. She now has a sentinel and, presumably, has allayed her anxiety, at least temporarily…maybe for two or three minutes, at which time she might walk down the hallway, looking around in anticipation of a potential need to flee.

At Myrna’s age, she’s unlikely to be cured of her OCD. We are compassionate and patient with her as she ritualizes her anxiety responses. We respect her limits, talking with her but being careful not to touch her unless she is feeling okay with that. She will let us know as soon as we come close to her personal space by making a sound that I interpret as expressing annoyance, accompanied by a don’t-even-think-about-it look in her eyes. Her response helps us to stay calibrated about how she’s feeling.

Obsessive-compulsive disorder is challenging to the person (or cat) with the disorder and, often, to those around them. We make every effort to minimize Myrna’s anxiety: not getting too close when she seems apprehensive, making sure she has access to a scratching post at all times, keeping to a predictable routine, and keeping suitable articles available for protecting her food dish. No one was ever cured of anxiety by being told to stop being anxious. Homo sapiens or Felis catus, we all need to be understood and appreciated.