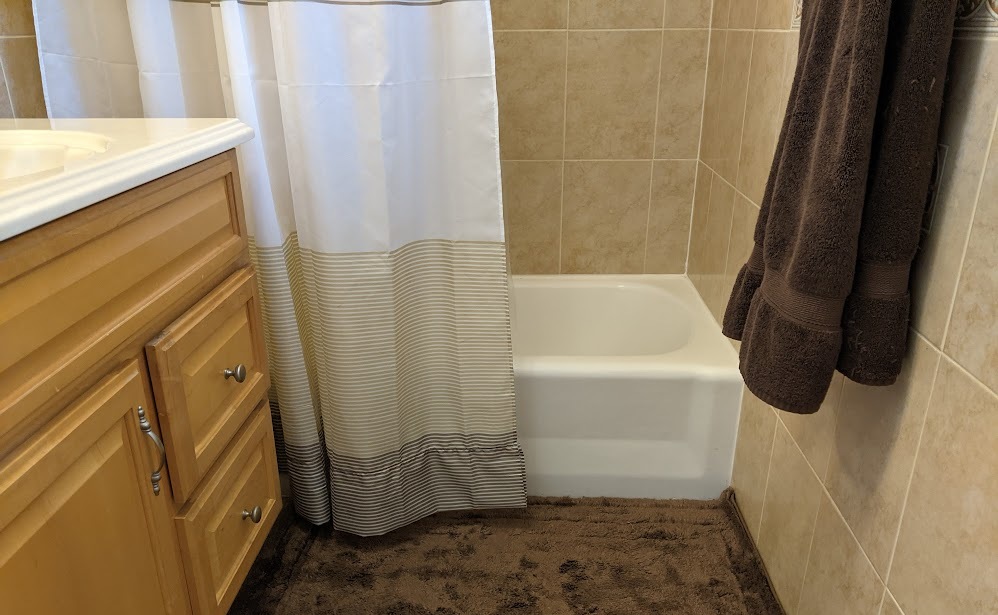 My father believed that imagination was precious, no matter the time or place. And one of those times was bath time when my sister and I were very young. He talked to us about heads, shoulders, knees, and toes. With our early bathing lessons, we learned that keeping clean meant starting with wiggling toes while a washcloth got every crevice clean and ending when the shampoo was rinsed from our hair.

But Dad also talked to us about the man who lived inside our ears. Our job—with our father’s help—was to wash the man’s car, being sure to wash all around our ears. Our bathtub became a lake with us as little fish. At other times Dad would tell us a story, perhaps “Goldilocks and the Three Bears,” told in the four voices of the folktale’s characters. By story’s end, we were clean and wrapped in towels. A tub with just enough water for two little ones to be washed was a place to call on our imaginations, to hear and see what we could not reach out and touch.

The history of bathing is fascinating, particularly bathing’s place in society: At what point did not smelling like aged bacteria on sweat become the concern of ordinary people? I know only a little of my parents’ and grandparents’ early exposure to bathtubs. I do know that my mother spent her impressionable early years using an outhouse. A galvanized tin tub was set up in the kitchen on bath day. They lived in an outer area of Philadelphia, where indoor plumbing was less readily available. Throughout the decade of the Great Depression, the family’s financial constraints made installing a bathroom with a toilet and bathtub out of the question.

Our family’s stories about bathtubs include one about our great-grandmother; we called her “Nanny.” She lived in a modest row home in Philadelphia that had a claw-foot tub, well worn, as I recall. She was born two generations before indoor plumbing was common, even though that city had begun to install water mains beneath city streets in the early 1800s. As adults, Nanny’s generation saw galvanized tin bathtubs for a Saturday body scrub replaced by porcelain-glazed tubs that drained into the network of iron pipes that came with the addition of indoor plumbing.

With aging and its ability to limit mobility, Nanny found it too difficult to climb over the high sides of the tub and seat herself in the water, then to stand and safely climb back out. So, an ingenious solution came about: a wooden swing attached to sturdy ropes, threaded through a pulley. Nanny would hoist herself up, swing over the tub, and deposit herself in the water. When finished, she would pull on the swing’s rope and the pulleys would guide her heavy body up, at which point she could use her legs against the side of the tub to push away and toward the floor. Eventually, of course, this was no longer an option and washing up at the sink was all she could manage. She was the matriarch of our family until her passing, at which time my grandmother took on that role– both women determined and independent-minded in an era when that was an uncommon trait in women. Nanny hoisting herself in and out of a bathtub is but a small example of our family matriarchs’ strength of will. Even at my young age, I was impressed by her strength—both physical and mental.

Not long after Nanny’s bathtub acrobatics came to an end, my parents, sisters, and I moved to the suburbs, in a new tract housing development. My parents were able to choose the color schemes for the bathrooms. The bathroom for the three sisters would have a pink sink, pink porcelain toilet, and pink tub. A popular style of tub at the time was the sunken tub. The lip of the tub was right above floor height. What quickly caught my eye, though, was that this tub had a shower head on the wall. Entering those preteen years, I was grateful to no longer sit in water I had just used to scrub off what, once removed, formed a lightly gray and sticky ring around the tub.

My joy was not permanent, however. The summer before my sixteenth birthday I was to become reacquainted with sitting in scum and calling it “getting clean.” I had sustained a lower back injury after a very serious car accident. Part of my prescribed back treatment was to sit in warm water containing dissolved Epsom salts. Descending into the tub triggered pain that brought tears to my eyes. A bath in Epsom salts did not relax my back muscles so that healing could occur. Surely my doctor had never sustained a spinal injury. I eyed the stall shower in my parents’ bathroom (blue ceramic tiles across all walls of the shower and covering the sink counter) with a considerable amount of envy since stepping into a porcelain tub to shower would be too slippery a risk, and climbing into and out of the tub was so painful. I pleaded, and my parents were compassionate enough to allow me to shower in the blue room.

Despite periodic recommendations for this form of torture from physiatrists and physical therapists over subsequent decades, I have not taken a bath since that summer. Maybe their tolerance for being surrounded by what we delicately refer to as a bathtub ring is fairly high. Adherence to a regimen of strengthening and stretching exercises is, by comparison, very appealing.

Every once in a while, though, as I finish my shower by washing behind my ears, I think of that little man and his dirty car and wash just a little bit longer.