An Epicure in Andalusia 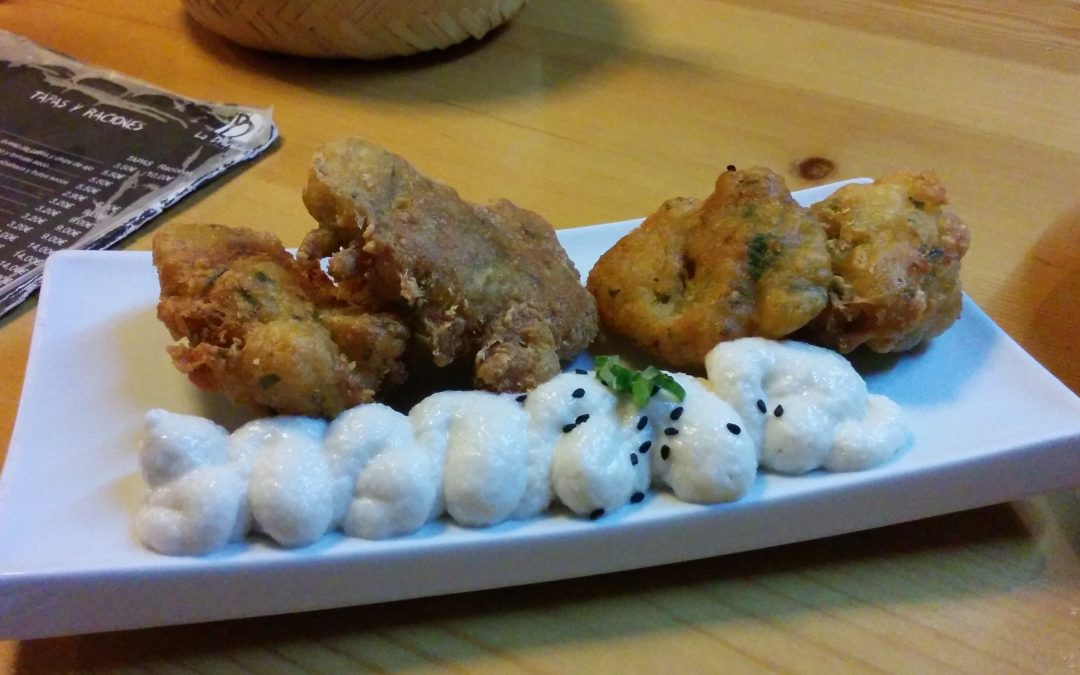 There is something about the people of Andalusia that mirrors their regional cuisine: They are approachable, delightful, and subtly but deeply complex.

From the Seville Airport to downtown Seville, after my day of international flight, my taxi driver sang classical flamenco songs, welcoming me to Andalusia with his expression of love for his cultural heritage. The effects I felt from the chaos and confusion of traveling from Sunnyvale to Seville dissolved away with his lyrical cante flamenco.

Despite eyes that wanted to close, my mind was full of Internet images of the place I intended to dine that evening, La Brunilda Tapas, and of its tapas offerings. Andalusia is the original home of tapas. While my plans for each day would be quite flexible, dining would not be left to caprice. Settling into my hotel room, I was glad that I had arranged for a suite with a full shower– something apparently difficult to find in Spanish hotels. I showered, rested, and dressed for the evening.

I arrived shortly after the 9 pm opening of La Brunilda, prepared to wait for a table in a line that ran out of the restaurant doors and became small clusters of friends passing the time. Late evening sunlight still dappled house-fronts on either side of the narrow, cobblestone camino. I edged my way through the door to put my name on the waiting list– a table for one, several parties of three or four people already waiting for tables in a bistro that could seat about thirty.

The servers bustled. The diners relaxed. I patiently waited to enjoy the highly recommended cuisine. I wedged myself between a server station and a wall for a while. Another waiting customer smiled, approached, and offered advice on being served: Put your name on the list for a table and wait at least an hour, or stand behind someone sitting at the tapas bar and take their seat as soon as it becomes available. The latter was her intention and she offered, with her partner, to show me how it’s done.

We exchanged pleasantries while she estimated how long it would take for this bar patron or that to finish what remained on their plates. To my relief and her apparent pleasure, she eyed three seats that would soon open up; there were only six seats at the tapas bar in total. Within minutes, I slid onto a barstool, caught the server’s eye, and ordered a glass of locally produced Campo Viejo Rioja Reserva. In Spain’s restaurants, wine storage is carefully maintained, with one wine cooler reserved for reds and another, at a lower temperature, for whites. This vacation was all about the food, but it quickly also became all about the wine.

My dining companions explained that bacalaítos, salt-cod fritters, are a regional specialty, basic to any exploration of Andalusian cuisine. So that would be one of the tapas I ordered. Tapas de Risotto con Queso Idiazábal y Setos would be the first of many styles of risotto I enjoyed in Andalusia, Provence, Tuscany, and Rome. But for now, who could resist a creative risotto with a signature Basque sheep’s milk cheese and locally grown mushrooms?

My gregarious dining partner was studying law; her fiancé was an engineer. They lived in different cities and always ate at La Brunilda when they met in Seville. I shared my intention for this vacation: to learn more about regional cuisines and to walk around each destination city to experience the “ordinary,” without tour guides, without a schedule. They noticed my little black book, and I explained that with each meal I would take photographs and gather as much information as I could about the dishes I ordered. Yes, writing in a physical book with a physical pen, I confirmed. No, taking notes on a phone would not do at all. Cooking and eating are physical delights; writing by hand affords time to capture the experience more thoughtfully. It is sensual in the way that creating food and enjoying a meal are. Mobile phones are not sensual.

The bacalaítos arrived first: light, fried cod fritters with an Asian pear aioli that redefined what an aioli could be.

My dining companions were eager to hear my reaction to the bacalaítos, a pride of the region. The aioli was so surprisingly different and such a fine complement to the coarser nature of the bacalaítos that a forkful of the combination formed a fine balance for the palate. The plating highlighted the complementarity of fritter and aioli, fritters arranged in a seemingly haphazard way (that is, carefully made to look casually placed); large, white aioli puffs—like an oversized string of pearls—on the other side.

The preparation of bacalaítos begins by soaking salt cod in water for a full day, changing the water from time to time so that most of the salt will be leached out. The rehydrated cod is poached in milk and chopped scallions. Mashed potatoes are beaten together with the cod, then mixed with olive oil, scallion tops, and fresh parsley. Fresh lemon juice stands in for salt and freshly ground black pepper adds a little heat.

Once chilled and firm, the cod mixture is shaped into small balls that are then flattened into roughly round discs, each one to be dusted with flour, dipped in beaten egg, and then coated with bread crumbs. The frying process will turn the crust crisp and golden and the entire cod fritter piping hot. This is comfort food, Seville-style.

Any aioli requires careful attention, but one that adds fruit should be more delicate in flavor and structure than a traditional aioli; it asks much more of the cook. One trick is to use only egg whites to achieve the desired texture and height. Pared, cubed Asian pears must be cooked just until tender, then drained, pureed, and strained to remove most of the excess moisture. The puree should be thoroughly combined with light touches of lemon zest, lemon juice, white wine vinegar, and honey—all of which support the lightly fruity flavor. Once the egg whites are whipped into soft peaks, a combination of light olive oil and vegetable oil (nothing that would turn this white aioli green!) is added, a small amount at a time, while whipping until thoroughly combined and the egg whites have formed stiff peaks. At that point, the pear mixture is gradually and very gently folded into the egg whites so that the aioli does not lose its delicate structure. White ground pepper creates a piquant contrast with the faint sweetness of the pear.

While I was taking photos and scribbling notes, the risotto arrived. Served in a shallow bowl with a wide lip that was sprinkled with fresh oregano and cracked black pepper, the risotto itself was creamy with medium body.

Unlike the more commonly understated use of minced shallot, this risotto is made bolder with a substantive use of finely chopped yellow onion. Mushrooms are tossed with caramelized onion and sautéed. Once the Arborio rice has been mixed in, the process follows the usual risotto preparation of the rice, using white wine and broth. When the rice is al dente, grated cheese and butter are folded in. As with most risottos, the cheese should not dominate. A small amount of Idiazábal cheese gives the La Brunilda chef’s recipe part of its signature taste. Sautéed porcini mushrooms, peeled and roasted asparagus spears, and crumbled center-cut bacon top the risotto, resulting in a delightful complexity of textures, flavors, and color accents.

I knew before leaving the restaurant that I would be making this risotto for many years and for many friends. After eating far too much (tapas translate to “little plates” but that is a misnomer in Andalusia), I thanked my eating companions for their excellent recommendations and wished them well.

Returning to the camino around 11 pm, the air was still warm, the breeze now cool, and the sky not yet entirely dark. The cobblestone lane gave way to the paved boulevard and the path back to my room, where I would rest and prepare to continue my embrace of life in Seville.