A Walk Along the Levees 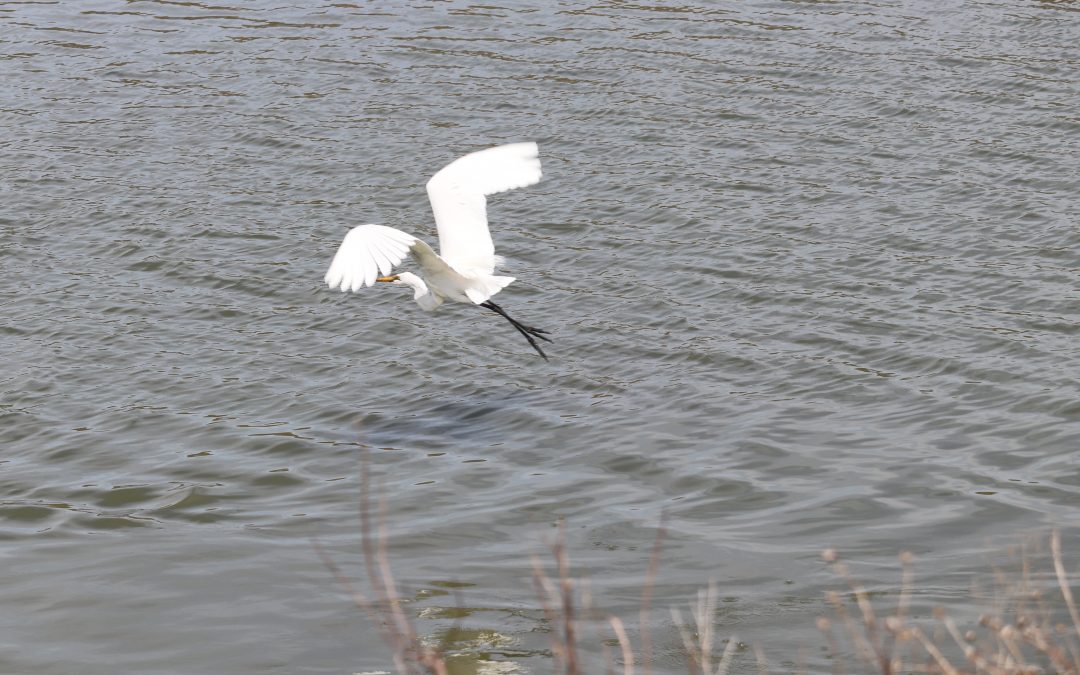 A few minutes’ drive from my home on a typical January day, northern shovelers, teals, gadwalls, ruddy ducks, and mallards float amidst the ponds and along the Charleston Slough. Male and female pairs paddle toward a shoreline or simply take a meandering path in the water. American coots–easy to spot with their black bodies and white beaks–float among their distant genetic relatives. Even more distinctive are the common gallinules, whose bright red beaks are tipped with yellow and whose legs are lime green. I cannot imagine why their name includes “common.”

From the grassy banks of the channels, snowy egrets and great blue herons keep one watchful eye on human passersby; great egrets take to graceful flight. Large ravens stand their ground along the trailside, with a don’t-you-dare bully’s stare. White-tailed kites and peregrine falcons soar above in search for prey. Turkey vultures soar low and search for carrion. A stretch of a levee is blanketed with white pelicans.

This is an ecosystem that appears to thrive on tolerance. The coots weave through a flotilla of mallards without so much as a skirmish. The raptors have the same goal, and it’s not each other’s demise. The cormorants look down from their perch on a high-voltage electrical tower with a seeming disinterest in what’s happening below and above.

Each time I walk there—often for as long as two hours—I am heartened by my ability to focus on all of this natural wonder and to forget that the ecosystem includes much that would not naturally occur without the presence of a dense human population: a far-reaching water pollution control facility, towering landfill mounds, and a string of high-voltage power lines that span the south end of the San Francisco Bay. Along the water’s edge, a Lockheed-Martin campus, Moffett Airfield, Shoreline Amphitheater, and, to the south, Santa Clara high rise offices assert another kind of power.

But look beyond them and the Santa Cruz Range appears. Look north along that ridge to see fingers of white fog over shallow gaps. Think back on the history of this area while walking past a salt pond—one that remains of the many that were part of a booming salt industry before California became part of the United States, before the discovery of California gold.

Across the bay, the Diablo Range begins its winding path that reaches all the way to Salinas. The Lick Observatory is visible, perched on Mount Hamilton as if it were observing the valley and not the universe beyond our planet. The hillsides’ native grasses have changed from gold to green, marking the season’s change in this peculiar land where rain falls from mid-autumn to mid-spring, only to yield to month after month of bold sun and dry air.

The term “barrenness of winter” has no place here. It is winter’s bounty that displays itself just a short distance from clusters of six-story office buildings and high-density housing where we work and live.